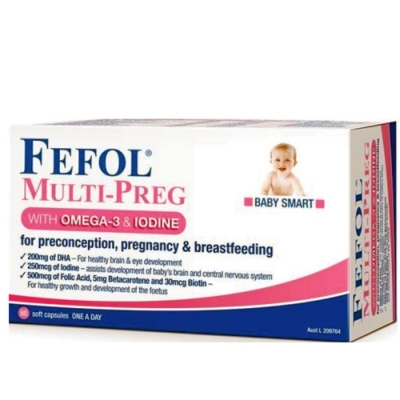 Fefol Multi Preg with omega 3 and Iodine has 14 vitamins & minerals including:

Delivering 200mg of DHA for brain and eye development

DHA has been scientifically demonstrated to play a critical role in the growth and functional development of the brain during the third trimester and the early postnatal period when maximal growth occurs.
It also pays an important role in retinal development, where DHA constitutes 60% of total polyunsaturated fatty acids.
Pregnant women should take 100~300mg of DHA daily to look after the needs of the fetus.
500mcg Folic Acid
To reduce the likelihood of neural tube defects such as Spina Bifida

Poor folate status either 1 month before conception or during the first trimester of pregnancy is an independent risk factor for neural tube defects in the newborn.
According to clinical studies, pregnancy care or early pregnancy supplementation should equal 400~600 mcg/day.
250mcg Iodine

Scientific evidence shows that mild iodine deficiency during pregnancy can have subtle effects on brain development, lowering intellectual functioning and inducing psychomotor deficits in early childhood.
Iodine deficiency during pregnancy has been associated with increased incidence of miscarriage, stillbirth, and birth defects.
The Australian Thyroid Foundation suggests that pregnant women should be taking iodine supplementation in doses between 100mcg and 200mcg per day.
12mg Iron (as Ferrous Fumerate)

Marked increases in the maternal blood supply increase the demand for iron and often additional supplementation is needed to avoid deficiencies.